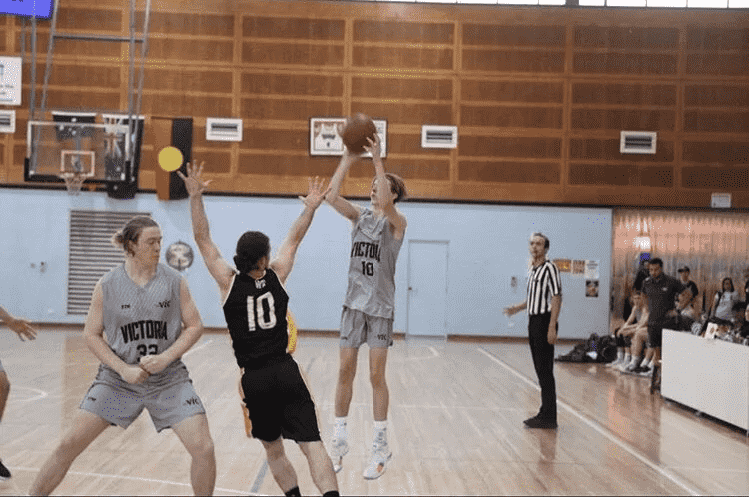 As players, coaches, scouts and fans of the game we often find ourselves labelling players for what they do well or don’t do well. We say things like “he is just a shooter” or “he is a slasher.” These statements may be true when describing a player, however we often over generalise a players ability.  When describing Zac Triplett as a player many would have you believe that he is just a great shooter, which he certainly is, however when accurately describing Zac, there is far more to his game than meets the eye. The first thing you realise when you stand next to Zac is how deceptively tall and long he is. When you talk to him about the game you can sense right away he has a high IQ and understanding of basketball.

These two attributes alone lead you to the fact he is far more than just a shooter. If you watch him closely you begin to see how he uses these elements to his advantage. He can stay in front of players who are far quicker and more physically explosive than him by using his length and IQ for the game. He anticipates exceptionally well. Whilst he doesn’t possess blistering speed or a vertical that is off the charts he is highly agile when moving laterally. The more you watch Zac, you will also notice that he constantly comes up with extra possessions for his team. Whether it be on the offensive glass or forcing deflections and steals, he just seems to always be in the right place at the right time.

When you watch him off the dribble, he is constantly getting in the paint. He is a great ball handler and uses his timing, lateral agility and IQ to continually penetrate and create. On top of this when he does take it to the rack he finishes well under contact.

Don’t get it wrong, just because we are highlighting Zac’s versatility and how he is often generalised as a shooter, make no mistake, Zac Triplett is one of the best shooters in the country. He can single handedly take a game over just with his elite ability to shoot the 3 ball, from anywhere on the court. Zac is well on the radar of numerous NCAA D1 programs just for his shooting ability. What we know is whatever school he signs at, they will be getting far more than “just a shooter.”

We managed to get a few minutes with Zac recently to have a chat and find out what he is up to how he is approaching fulfilling his college dream.

Aussie Prospects: You have had a busy schedule of late, with your last year at high school kicking off, trips to Universities in the USA and U20 Nationals in Canberra, how do you manage your workload between training, playing and school with so much on?

Zac: Its been a very busy start to the year with a lot going on. Managing my workload and busy schedule is one of the big things that allows me to do everything that I do. To manage my workload and busy schedule I plan out my week with a day by day schedule of what I have on with school work, trainings and also games, which then allows me to work out when I’ll have time to do my own things other then just sport and school.

Aussie Prospects: You are projected to go to a good quality NCAA Division 1 level school in 2020, how have you gone about getting exposure to that level and what would you say are the key things for younger athletes who dream of doing the same?

Zac: Getting exposure was difficult at first but once I began meeting the right people that could help me with getting exposure to coaches in the US it became easier. I got exposure to US coaches by attending the 2018 Aussie Prospects Tour and playing in front of hundreds of coaches over in the US, but I have also put together game tapes and highlight tapes to send off to a number of schools who have shown interest in me as well as schools that I can see myself playing at. I would say the biggest thing for younger athletes who want to go to college would be to go on a tour to get exposure as well as being proactive and sending out game tapes to schools that best suit you.

Aussie Prospects: Even though we know you are a highly versatile player, you are regarded as one of the premier shooters in the country. How have you developed this ability throughout your basketball journey and what advice do you have to other young budding shooters reading this article?

Zac: I have continued to develop my shot ever since I was younger and am still working on this daily. I work to expand on my ability of being able to shoot the ball at a consistent level whether it be off the dribble or catch and shoot, as I believe it is one of the biggest things in the game of basketball nowadays. Advice I would give to kids coming up would be to work on your shot everyday whether it be just form shooting or a lot of repetitions it will all help in the long run.

Aussie Prospects: Last year you went on the Aussie Prospects USA Tour and had a great showing. Tell us a little about that experience and what you took away from the trip?

Zac: Last years Aussie Prospects was a great experience, which gave me the chance to showcase my talent in front of a lot of college coaches as well as the chance to play against some high quality talent. Playing against some high quality Americans was a great experience and allowed me to see how hard and uptempo the style of play is as well as the athleticism that the Americans play with.

Aussie Prospects: You recently took visits to Virginia Tech, Pepperdine, University of Cal Santa Barbra (UCSB), UC Riverside, Cal State Fullerton and Incarnate Word. Can you give some insight into what that experience was like and what players should expect when taking visits to schools?

Zac: Visiting those colleges was a great experience, seeing what the everyday life of a college athlete is like and also the campuses were incredible. Players who visit schools should expect good facilities and nice campuses. Players who go on visits should have a variety of different questions on what they want to know about the college whether it be the basketball side of things or about the education side of the college to see if it is the right fit for you.

Aussie Prospects: Can you please share with us a little about your experience at the recent U20 National Tournament where you represented Victoria as a bottom age player? From trialling to getting selected and then competing?

Zac: The recent under 20 Nationals was another good experience as I got to play against other athletes who are both my age as well as one year older then me. The trialling process was relatively short compared to the under 18 process, it consisted of 6 sessions that went for about 2 hours, with a certain number of kids getting cut after each session. I was then lucky enough to be selected in one of the 2 victorian sides that would head off to Canberra for the national championships.

Aussie Prospects: If you had one piece of advice for up and coming Aussie players who have dreams of playing at the elite level what would it be?

Zac: Advice I would give to up and coming players would be to make the most of every opportunity you get and to make sure you work hard all the time as you don’t know who could be watching.