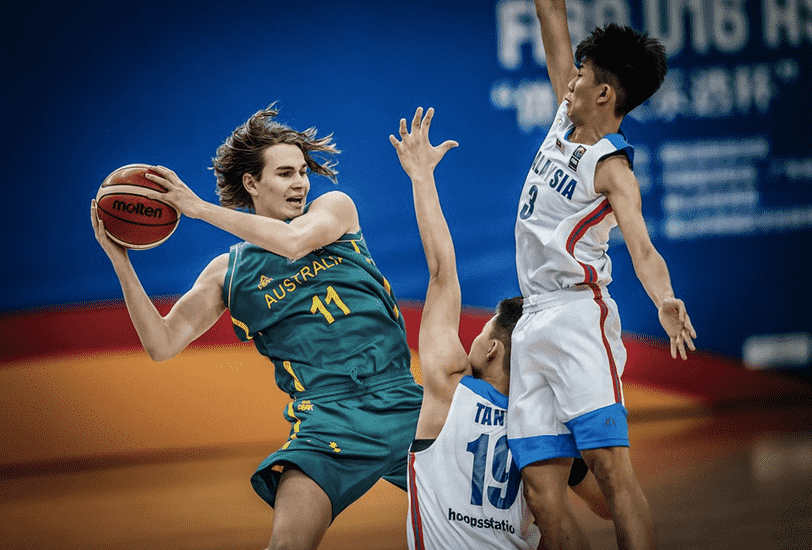 Joel Capetola has built a reputation on the national stage for his exceptional scoring ability, high basketball IQ and his ability to play multiple positions ranging from Point Guard to Small Forward. More recently, Joel had the great honor of representing Australia in International competition as a key member of the Australian Crocs team that took home the gold medal at the FIBA U16 Asia Tournament held in China. Joel had a solid tournament where he averaged 8ppg, 4.4rb and 2.6as per game. We sat down with Joel for a few minutes to find out more about his journey to representing his country, his experience in China and his involvement with Aussie Prospects.

Aussie Prospects: Joel, thanks for taking the time out of your busy schedule to share with us.

Aussie Prospects: Your recent experience representing Australia is one many young basketball players dream of, what was it like pulling on the green and gold for the first time?

Joel: It was one of the best experiences of my life, putting on the jersey and playing for my country was a dream come true.

Aussie Prospects: What was your favorite moment at the FIBA U16 Asia Tournament?

Joel: My favourite moment was winning the gold medal with the team, all the hard work and time we put in at camps together really paid off and helped us with our success.

Aussie Prospects: Between Luke Jackson and Luke Travers, your fellow Crocs teammates, who would spend more time in front of the mirror doing their hair?

Joel: Surprisingly not too much effort goes into their hairstyles, must come natural to them.

Aussie Prospects: In July 2017, you attended the Aussie Prospects USA Tour, how did you find this experience and what were the main things you took away from playing in these tournaments?

Joel: Playing over in the US on the Aussie Prospects tour was a great experience to play against the best players in my age group. The main takeaways from the trip was the pace and athleticism they play with over there, it’s a great way to develop your skills against tougher competition.

Aussie Prospects: Whilst on Tour with Aussie Prospects, you had the opportunity to play alongside and against a number of the top ranked high school players in the country whilst attending the West Coast Elite Top 100 Camp. How do you rate this experience and what were the benefits for you in preparation for representing the Crocs in International competition?

Joel: Playing at the camps in America there’s not too much ball movement, but the highest ranked players will still throw the extra pass instead of just looking for themselves. Playing against the bigger bodies there helped me become more aggressive and play my role to help the Crocs team get as many wins as possible.

Joel: If your interested give it a go, it’s a great way to see what you need to work on to reach that level and develop new skills.

Aussie Prospects: What are your goals for your future in the sport?

Joel: My goal is just to play at the highest level possible.

Aussie Prospects: Thanks for your time Joel, we wish you all the best for the remainder of the 2018 season and we look forward to continuing to work with you in achieving your goals.