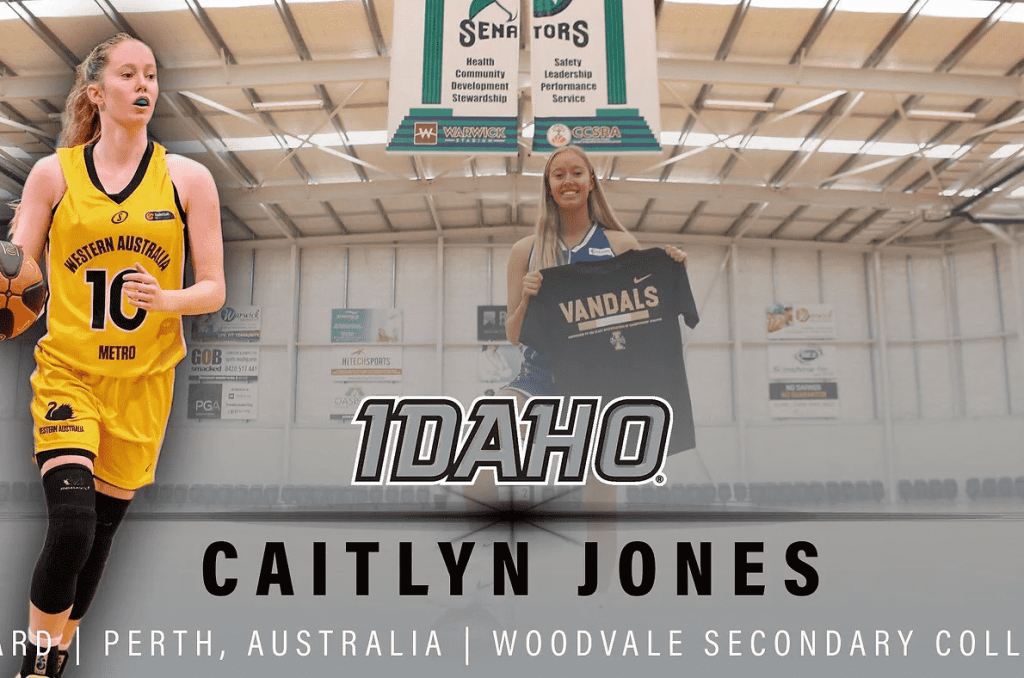 You know those players who when you watch play, you know you cant look away because at any moment they might do something spectacular? That is Caitlyn Jones.

Possessing an ankle breaking crossover and a dribble game that is the envy of even the most gifted ball handlers, you cant help but watch her every move when she has the ball in her hands. Its no wonder the University of Idaho has snapped up Caitlyn, one of Australia’s brightest young guards, to join their Vandals squad in the fall semester of 2019.

With a highly rounded pull up game and the ability to get into the paint with ease, Caitlyn is a weapon at the offensive end. She is a flat out scorer with an ability to accumulate points very quickly. She frequently sends her defender heading in the wrong direction and is ready made for the US game.

A fierce competitor with a killer instinct to win, Caitlyn is just one of those players you want on your team. Off the court, you couldn’t get a nicer, more down to earth person. Caitlyn has time for people, no matter who they are, which in today’s society is becoming a scarce commodity. We are so proud to have Caitlyn as our first ever female feature athlete and in the short amount of time she has left in Perth before she heads state-side she was kind enough to spend some time talking to us.

Aussie Prospects: Shortly you will be attending the University of Idaho on a full athletic scholarship, can you please share a little bit about how you ended up signing with the Vandals and what other schools were recruiting you?

Caitlyn: After U16 Nationals in Kilsyth in 2016, I was approached by a few coaches and a scout for Premier Basketball Report, a recruiting organisation based in the states. They held their first international recruiting camp in Melbourne later in the year and I attended, and it really kick-started my recruiting process. I had quite a few schools show interest in me and they were keen to see me play in person, so I went on to play AAU Basketball in the US with AUSA Hoops in Dallas, TX and Kansas City, MO. I produced a lot of highlight film on YouTube leading up to the tour and it caught the eye of a few schools, including Idaho, so I built a great relationship with them even before they had seen me play live. My coaches were at both tournaments in Texas and Missouri, and Coach Newlee offered to me just as I was walking onto the plane to leave the US! Glad I picked up that call! I eventually took an official visit to Idaho in September and loved it. I committed and then signed my NLI (National Letter of Intent) in November. My top 7 schools that I considered committing to were University of Idaho, Boston University, Wichita State University, UTRGV, West Texas A&M, San Jose State and Idaho State.

Aussie Prospects: Thinking back on the recruiting process what did you find the most difficult part?

Caitlyn: I think the most difficult part of the recruiting process is navigating your perfect fit. A lot of people get caught up in the size of the school, it’s location etc, which are important factors, however I think while being recruited it is important to have an open mindset and address each school that shows interest in you in the same way, as that will attract what is suited to you and where you fit best.

Aussie Prospects: To play NCAA Division 1 basketball there are very specific academic requirements. Was this something you were aware of as you were going through high school or did you find out the requirements later on in high school?

Caitlyn: Particularly for Division 1 basketball, I believe it is important, and to some extent easier to take ATAR subjects in Year 11 & 12, as it sets you up the best to achieve the academic requirements of D1 basketball. Academic eligibility is something you really don’t want to be in doubt as it can limit your recruiting, because at the end of the day schools are going to pursue players that will actually be eligible to play for them! One thing I learnt about halfway through Year 11 is that PES (Physical Education ATAR) doesn’t count as a subject according to the NCAA, so I would advise to not take it initially & not go through the struggle of moving classes in Year 11!

Aussie Prospects: For those who have never taken the SAT exam before, what advice would you give?

Caitlyn: Don’t overthink it too much, and treat it like one of your old NAPLAN exams. It is all Literacy and Numeracy, so doesn’t require study as such, but practice. Do a couple of practice exams before you take the real SAT.

Aussie Prospects: Western Australia is producing some outstanding female basketball athletes, many who are signing and playing in colleges across the USA. What do you believe makes Aussie ballers attractive recruits to the US College system?

Caitlyn: I think our work ethic and hustle on court really makes Aussie ballers attractive. Coaches love to see real grit & hard work and we really bring that every time we hit the court. Most Aussie players also have a really upbeat, positive attitude and that will draw success at any level.

Aussie Prospects: Late in 2018 you competed in the first ever Aussie Prospects Women’s Invitational. How did you find that tournament and what did you take away from the experience?

Caitlyn: I absolutely loved the tournament last year and had a great time. By that point last year I had already committed, so I wasn’t as nervous as the other girls on my team. I had quite a young team as well, which was a switch up from always being the youngest at SBL! I felt it was a good experience for me in terms of leadership, and refining my point guard abilities when I’m changing into that spot. We were super successful going undefeated until the Grand Final, which was unfortunate, but I loved every minute of it with my team.

Aussie Prospects: What advice would you give to all the young aspiring female ballers coming up who also dream of playing basketball at the highest level in the USA?

Caitlyn: My advice would be to work hard, all the time, and the rest will fall into place. Create opportunities for yourself, as no one is going to do it for you, and always maintain a positive attitude. Coaches take the same notice for your actions on the court and off the court, and you never know when someone is watching, so aspire to be a ‘complete’ player all the time and it will start to come naturally!

Aussie Prospects: Thanks for taking time out of your busy schedule and we wish you all the best for your College career!

Caitlyn: It was my pleasure and thanks for your well wishes.